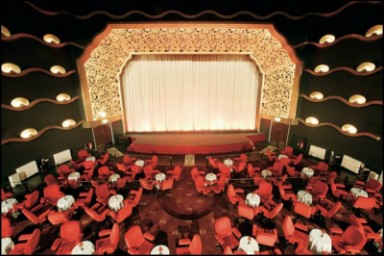 Nuffield Southampton Theatres
In 1964, with support from the Nuffield Foundation, the University of Southampton built a theatre on its campus for the people of Southampton.  The theatre was built by Sir Basil Spence, OM RA, who worked closely with Sir Richard Southern as consultant for the interior design and layout of the theatre, which was officially opened by Dame Sybil Thorndike on 2 March.
Nearly twenty years later on 1 November 1982, Nuffield Southampton Theatres (NST) became an independent producing theatre funded by Arts Council England, Southampton City Council, the University of Southampton and Hampshire County Council. Over the next 25 years, NST came to be recognised as a major force in British theatre.
The theatre shows many ways of working with and encouraging young and old talent alike. The Royalty would have a limited stage area but the main auditorium would make a grand setting for performances.
exeterPhoenix
Bang in the heart of the city, Exeter Phoenix is the South West’s foremost multi-artform venue. In our building you’ll find several art galleries, a large auditorium for gigs and theatre, a cinema, a filmmaking hub complete with editing suites, artist studios, a radio station, sound recording studios run by Sound Gallery CIC and a print workshop all centred around a friendly café bar serving delicious locally sourced food and drink.
With hundreds of events programmed each year, spanning music, art, film, theatre and comedy as well as a whole host of learning activities, Exeter Phoenix is a vibrant venue proud of its diversity and revelling in its eclectic buzz. In our programme you’ll find award-winning work by internationally renowned artists alongside new work by local creatives. We like to develop new talent – giving the artists we work with the tools to experiment, take risks and realise their best ideas – and we love it when our audience can say they saw great work here first.
Our new independent screening space, Studio 74 launched in October 2015 and presents an inspiring regular programme of first rate alternative film and the latest art house releases, alongside festivals and exciting immersive film events. Whether it’s to engross yourself in a good story or catch an eye-opening documentary, we invite you to come and give Exeter’s new solar powered cinema a go.
The Creative Hub is the umbrella name for all the things Exeter Phoenix does to nurture the city’s arts scene besides putting on events. We offer everything from artist support and advice, training, creative opportunities and networking socials, and we cover all art forms, from filmmaking to visual art, theatre and music. Whether you’re already an artist, or simply someone who wants to hang out with likeminded people, the Creative Hub is a great way of keeping connected.
Whether you want to learn a new skill, spark new ideas or simply wish to be entertained, we hope you can join us at Exeter Phoenix soon.
Strand Arts Centre
Strand Arts Centre is a charity and not-for-profit Cinema & Arts Centre.  We are proud to occupy a building which has made such an important contribution towards entertaining and educating the people of East Belfast and further afield since 1935. We believe this heritage coupled with its significant architecture and location makes it the perfect place for an Arts Centre in East Belfast.
We have a daily film programme, special events, classic movies, free film clubs, Live music, theatre, workshops and more...
About Us
Strand Arts Centre aims to:
Our Vision
The Strand Arts Centre’s strategy involves the wholesale refurbishment of the building to modernise through-out providing high specification performing arts space including a drama/dance studio, 3 workshop rooms and 2 theatres as well as a cafe, bar/restaurant and gallery space.
Tyneside Cinema
Visit the Tyneside Cinema website to see what else a cinema can do.
The cinema had occupied its Pilgrim Street site since 1937, and had by 1999 declined to a critical state, with many believing it would eventually be forced to close. The cinema required a number of improvements, and despite its history and prime location, the cinema had a serious financial deficit. A significant investment in the structure was required, and following a survey of the building, the cinema's board of trustees realised that a capital investment of about £7m would be necessary. The project secured the support of organisations including One North East and the Northern Rock Foundation. Seats removed from the Classic screen were sold in 2006, raising more than £5000 for the restoration project. The stated aim of the project was to celebrate the cinema's heritage as a newsreel theatre and also look to its future in the digital age.
The £7m restoration and renovation project was undertaken between November 2006 and May 2008. Original features inside the building had to be protected during the project, and the work uncovered a pair of original stained glass windows and mosaic floor tiling which had been hidden for years.
The Tyneside reopened in May 2008, following the major restoration of its original auditorium, alongside a modern extension and redevelopment of the upper floors designed by Fletcher Priest Architects and consulting engineers Cundall. The work added a new level to the building with two new screens, the Roxy and the Electra, housed on top of each other. A single projection block behind serves all of the cinema's screens. The increase in screens enabled more flexibility to respond to demand, and created space to move films around. A new bar, and a film learning centre called the Tyneside Studio, partly designed by filmmaker Mike Figgis, were also installed.
The project was completed with support from the Heritage Lottery Fund, Tyne And Wear Partnership, the European Regional Development Fund and many other trusts and foundations. The Tyneside project was also supported by members of the public, with over 700 individual donors giving to the redevelopment.
The Castle Cinema Hackney. Visit to see another successful restoration.

The Mad Cornish Projectionist
Cinema film and projection heritage network.
In 70mm
"To record the history of the large format movies and the 70mm cinemas as remembered by the people who worked with the films. Both during making and during running the films in projection rooms and as the audience, looking at the curved screen."

in70mm.com - a free, not for profit, web magazine, with more than 550 articles about all aspects of 70mm Films, history and technology. Some previously published in The 70mm Newsletter between 1994 and 2005. Most are written by readers and you are invited to write your story too.